Recently a misfortunate oversleeping lead to a fortunate meeting of 3 strangers from 3 different parts of the world, who all ended up together in Jonkershoek 9km outside of Stellenbosch to climb a mountain. The morning began hours before sunrise in Cape Town. Everyone attempted to keep their breakfast routine and between the jar of muesli, a large cheese baguette and a cup of watered down coffee from the petrol station, it looked like we might each have pulled it off. The 1.5 hour drive from Cape Town gave us the opportunity to get to know one another and by the time we arrived we were all still speaking to one another, which I took as a good sign. 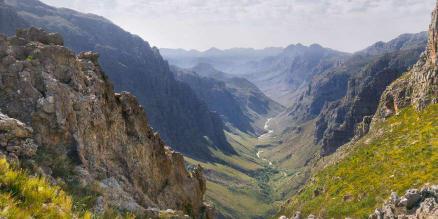 The scenery at the Jonkershoek Nature Reserve is awe-inspiring and we had to take a moment to appreciate the fact that we were all able to head out there on a Thursday morning whilst everyone else was getting ready for another day at the office. After paying the R30 per adult entrance fee, we drove for another 15 minutes on a dirt road which tested the VW Polo's 4x4 abilities! Getting out of the car we transitioned from the lingering smell of the cheese baguette to that of the fresh mountain air.

We had decided to take on the "Panorama Hiking Trail". This 17km trail takes you up the left side of the valley, around the rim and then back down on the other side next to the Eerste River. It's rated as a moderate hike but due to the distance we would need to keep a steady pace, with lunch and a few breaks in-between. We headed out but soon discovered that one of us suffered from a severe case of flower admiration. With the cameras out and the iPhone always ready for a snapshot the initial going was slow. Traversing up the path which had become a stream and passing through fields of flowers some taller than ourselves, we eventually came to our first resting point. Here on the upper left rim of the valley we were greeted by a spectacular view down into the rugged Assegaaiboskloof which runs perpendicular to the Jonkershoek valley. After almost depleting our trail snacks, resting in the sun and taking more pictures we decided to head off again. Our lunch spot was still a fair hike but we managed relatively easily. Unfortunately the air was very hazy at this point but it made our next break no less impressive, with views down below through the centre of the Jonkershoek reserve. Other than a couple of baboons in the distance occasionally screaming at us, we were struck by the silent beauty. Seeing the time though, we soon headed off again.

The route down the other side was heavy going as we had to make up lost time and the path was washed away in places. The knees started objecting and the sun gave us a beating. Finally reaching the Eerste River down below, we somewhat regretted our lack of time as there is a spectacular waterfall and rock pools excellent for cooling down after a long hike. Fortunately the last stretch back to the car from there was relatively flat, following beside the river for most of it. Arriving back again we realised we still had some time to spare so we decided to dip our toes into the icy cold river, thereby driving a thousand needles through our delicate city dwellers feet.

Along the route we had discovered each of our kryptonite weaknesses; between an uncontrollable itch from nuts, a debilitating shaking from a fear of heights and an inability to sing in public we were by no means an indestructibly trio on the mountain. Coming from Russia, Norway and South Africa we were not the United Nations either, but in the end I realised again how much people have in common despite coming from such different parts of the globe. Feeling refreshed and proud of our achievement we climbed back into the car and were promptly smacked in the face by the remains of the cheese baguette which had been waiting for our return in the baking car all day. 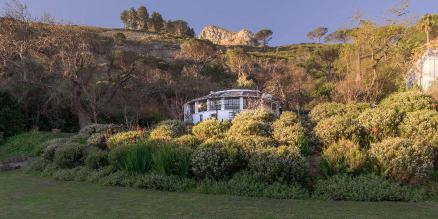 Not far from where I stay is a location that has a special place in my heart. The “Roundhouse Restaurant” on the slopes of Lions Head was originally built as a guardhouse in 1786 to protect the bay from enemy ships. It is now probably best remembered as Lord Somerset's hunting lodge after he had it renovated and lavishly refurbished. As the governor of the Cape Colony he would often host prominent guests, with whom he would sometimes go on hunting trips on the slopes of Table Mountain and the Twelve Apostles. After a day of hunting lions, leopards and buck, they would all retire to the Roundhouse. Since then the lions have disappeared and Camps Bay below is now an affluent suburb of Cape Town. Over the years it had various owners and many travellers and locals alike have stopped here and enjoyed it's hospitality.

My great grandfather’s diary has an entryon the 4th of May 1897: “We then climbed down on the other side to „Roundhouse“ close to the ocean. When we regained our strength there with a glass of wine, we commenced our return journey”. 117 years later I find myself at the same spot my great grandfather once stood, enjoying a glass of refreshing white wine as the sun sets over the Atlantic below. I wonder to myself how much change the Roundhouse will still bear witness to during my lifetime and if one day my great grandchild will also walk through these doors that have welcomed so many before.